What Is A Candlestick?

A K-chart is a price chart that shows the highest, lowest, opening and closing prices of a financial asset within a given time range.

The K-map was invented in the 18th century by a Japanese rice businessman named Honma, who first used the K-map in the rice futures market. In the 1990s, an American named Steve Neeson published the book "Japanese Candle Picture Technology", which introduced the K-diagram to the western financial world. After that, Benzong's K-diagram theory has been constantly revised and adjusted to be more suitable for modern financial markets. 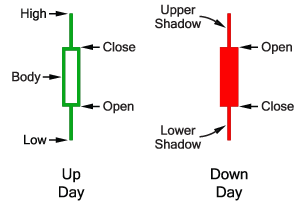 The above figure shows the components of the K-diagram.

The K-diagram usually consists of three parts: the main body, the shadow line and the color.

There are four data points in each K line: the opening price, the highest price, the lowest price and the closing price for a specific period of time.

Special circumstances occur when the opening price is almost equal to the closing price, in which case the K-line is often called a "cross star".

All in all, the entity shows the opening price and closing price of the day, the shadow line shows the high and low points of the day, and the color indicates the direction of movement during the formation of the K-line.

How to interpret the K line

Each K-line tells the story of the game between bulls and bears. To become a professional trader, the first thing you need to learn is to read the K-line.

In general, traders can interpret the K-line by examining the following three aspects:

The long shadow shows that prices fluctuated a lot at one time, but finally returned to the original price level, indicating that market sentiment is in uncertainty. The short shadow shows that the market is relatively moderate. Generally speaking, the longer the shadow line, the more likely it is that the price will move in the opposite direction.

One of the key indicators that should be noted when analyzing the K-line is the trading volume bound to it. If the price rise is accompanied by an increase in trading volume, the upward trend is more likely to increase. However, if prices rise sharply and trading volume decreases, it suggests that the rally may not last long.