What Is A Golden Cross?

Golden fork is a common bullish technical signal in the stock market. A golden fork is formed when the short periodic line, which reflects the recent price level, crosses the long periodic line from the bottom up.

This means that the short-term average is temporarily ahead of the long-term average, indicating that recent market sentiment is relatively optimistic, especially when the formation of the golden fork is accompanied by high trading volume. 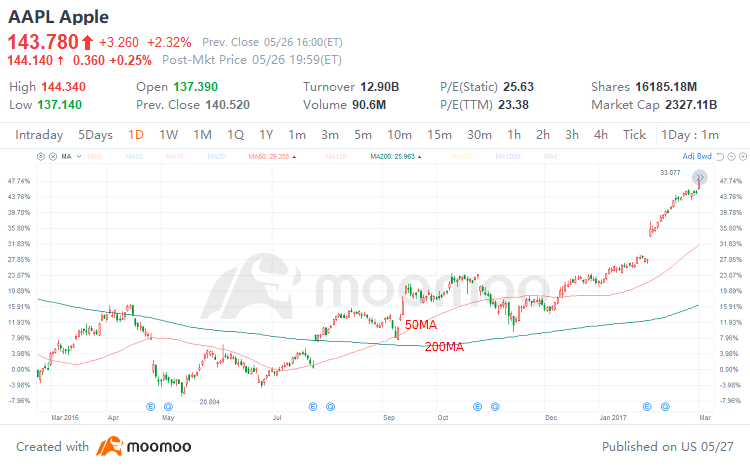 The common technical indicators of gold fork are MA, MACD, RSI and so on. Taking MA as an example, it is observed that the most commonly used short-term price line of MA gold fork is the 50-day moving average line and the long-term price line is the 200-day moving average line. Traders can also set moving averages for different time ranges according to their needs. The observation of golden fork can be applied not only to individual stocks, but also to market indexes.

There are generally three stages in the formation of MA golden fork.

(the moving average (MA) is a smooth curve formed by calculating the average price over a specific period of time and using these points. For example, for a five-day moving average, calculate the average of each five-day price, and then draw a line connecting these data points. )

How to use MA Golden Fork

MA gold fork has long been regarded by technology traders as one of the most common bull market signals, so it is a strong buy signal.

If you are a long-term investor and like to buy and hold, MA Golden Fork can be used as a timing signal to tell you when to enter the market.

(MA dead fork is the exact opposite of MA golden fork. A MA dead cross is a common bearish indicator when the short-term price average (usually the 50-day moving average) crosses the long-term price average (usually the 200-day moving average). MA gold fork is a positive signal for traders to enter the market, while MA dead fork is a signal for investors to sell at a profit. )

One of the key problems with MA golden fork is that it is a lag indicator. As a result, other technical indicators are often used in combination to confirm the trends indicated by the golden fork.