What Is "surrender" In Finance?

● In finance, capitulation refers to when a large number of investors decide to sell stock during a phase of extended decline, giving up on the asset and the hope of regaining their losses.

● In general, capitulation often leads to a short-term low in the price and is followed by a relief rally.

● Capitulation causes heavy turnover among investors. While it may offer an opportunity for investors, it is hard to forecast capitulation.

Traditionally, capitulation means “surrender" and it is another word for panic selling in finance, or liquidating a position in a security for a loss as it declines in the price because of fear of additional loss.

When capitulation occurs, investors who are still bullish on the company may believe it has hit a new bottom. These traders may consider this as a buying opportunity in the hopes that the stock will rebound and start to appreciate in value after all the panic sellers in the stock have given up.

This bullish approach is based on the idea that everyone who intended to sell has already done so, leaving only buyers to raise the stock price. The "end" of the capitulation, however, is difficult to pin down before it has really taken place.

How to spot capitulation in a stock

The end of a phase of capitulation is often sought after by investors who want to purchase a company at its low point so they can do so before it rises. However, capitulation is far easier to spot in retrospect than in the moment. A trader might try to do this by looking at the candlestick chart of a stock to see if they can see a "hammer candlestick" after a period of decline. When an asset trades substantially below its initial price but rallies close to the opening price throughout the trading period, it forms a price pattern known as a hammer in candlestick charting.

Here is a real example of a hammer candlestick and capitulation. The Dow Jones Industrial Average fell over 5% at its lowest point on March 23, 2020, yet it ended the day down 3%. It was a capitulation because of the index's significant recovery during the following two weeks. 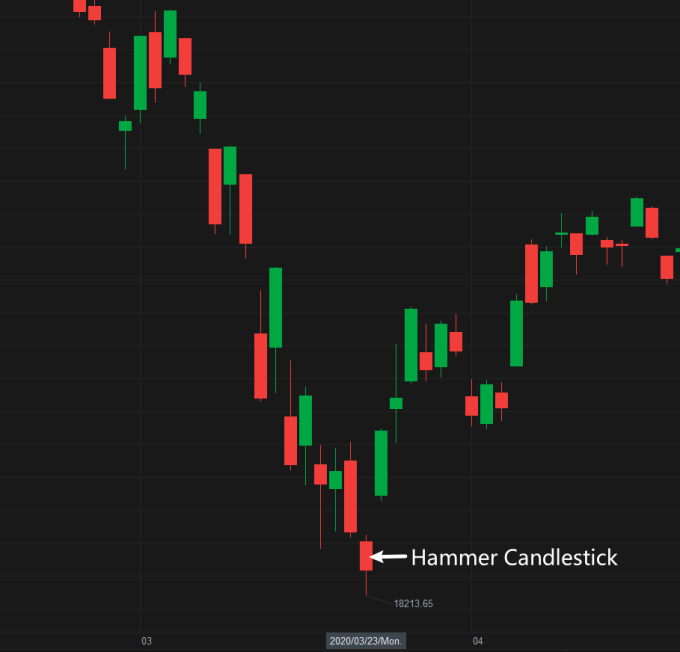 （Images provided are not current and any securities are shown for illustrative purposes only.）

Generally, hammer candlesticks are often present at a stock's bottom at the end of a period of decline and capitulation and just before a price rebound. Nevertheless, this isn't always the case, and historical patterns do not predict future outcomes. Like any other investing approach, trying to determine a stock's post-capitulation bottom using candlestick charts entails risk.